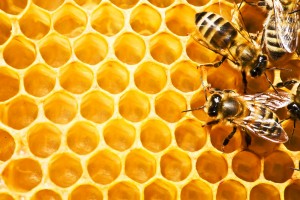 He may be humble but… this hard working little creature spends his life buzzing from flower to flower eating, digesting and regurgitating to make our beloved honey and to keep us alive!
Yes that’s right…In fact, Albert Einstein suggested that humanity would have only four years once bees disappeared! Bees are amazing little creatures and will travel over 60,000 kilometres and pollinate over 2 million flowers to produce less than 1 pound of pure beeswax…how precious!

Beeswax is the foundation of the hive. Honeybees build their comb from beeswax. Then they fill all those hexagonal cells with their honey and brood.

But just where does this marvelous wax come from? From their abs of course!! Well, the glands on the underside of their abdomens (I’m wondering how many crunches they do!).
In all seriousness though, beeswax really is an amazing product.

Burning beeswax emits negative ions in to your environment that clean the air and invigorate the body.

What on earth are these little ions?

Well… Air contains billions of electrically charged particles called ions. Ions help us to absorb and utilize oxygen, and in turn, they have powerful effects on our moods, feelings, energy, health and overall well-being.

On the other hand, too many positive ions are loaded down with pollution and allergens that are drawn to them and retained in the air in your home! Having your phone, laptop and other electronics in your home change the ions to positive making the air stale.

Releasing negative ions by burning beeswax, removes pollution and allergens from positive ions, allowing them to drop to the ground leaving healthy negative ions in the air. This is scientifically proven to reduce mould, mildew, pollen, pet dander, smoke, odours, even bacteria and viruses or any other impurities in your home. This is especially beneficial for people with allergies, asthma and insomnia.

These are the same negative ions you breathe in when you are down by the ocean or walking through a rainforest…so why not charge the air in your home with the same feel good qualities!?

In fact, once you have started burning your beeswax candle you can see that the wax becomes darker and there may be “bits” in the melted wax – this is a result of the impurities from your environment being absorbed and removed.

Beeswax burns 2-3 times longer than regular candles without any harmful emissions. Beeswax is also healthier than most soy wax because 90% of soy is genetically modified and processed with paraffins.

Used since the beginning of civilisation, recovered from Roman ruins and Viking ships…beeswax burns brighter and cleaner than any other candle and the light it casts has qualities similar to the suns spectrum.

So here’s to the humble bee! Not only is he cute and fluffy, he comes bearing many amazing gifts!!

I bought the French Vanilla beeswax candle and absolutely LOVE it. The sweetness of the beeswax with the vanilla is an awesome combination. As soon as I put the candle on, it quickly fills up the room with scent. Im planning to buy more as I use it every night and don’t want it to end!! Very happy with this product.